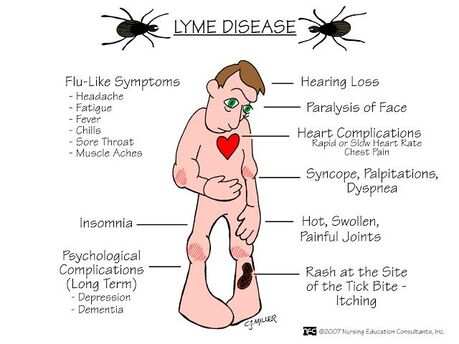 ​Lyme disease is caused by four main species of bacteria. Borrelia burgdorferi and Borrelia mayonii cause Lyme disease in the United States, while Borrelia afzelii and Borrelia garinii are the leading causes in Europe and Asia. The most common tick-borne illness in these regions, Lyme disease is transmitted by the bite of an infected black-legged tick, commonly known as a deer tick.
​To date we have helped over 40 persons remove Lyme and the good news is it is one of the easiest and quickest to remove in 12 hours or less of therapy.

You're more likely to get Lyme disease if you live or spend time in grassy and heavily wooded areas where ticks carrying Lyme disease thrive. It's important to take common-sense precautions in tick-infested areas.

Early signs and symptoms
A small, red bump, similar to the bump of a mosquito bite, often appears at the site of a tick bite or tick removal and resolves over a few days. This normal occurrence doesn't indicate Lyme disease.

However, these signs and symptoms can occur within a month after you've been infected:

Rash. From three to 30 days after an infected tick bite, an expanding red area might appear that sometimes clears in the center, forming a bull's-eye pattern. The rash (erythema migrans) expands slowly over days and can spread to 12 inches (30 centimeters) across. It's typically not itchy or painful but might feel warm to the touch.

Erythema migrans is one of the hallmarks of Lyme disease, although not everyone with Lyme disease develops the rash. Some people develop this rash at more than one place on their bodies.

Other symptoms. Fever, chills, fatigue, body aches, headache, neck stiffness and swollen lymph nodes can accompany the rash.
Later signs and symptoms
If untreated, new signs and symptoms of Lyme infection might appear in the following weeks to months. These include:

Erythema migrans. The rash may appear on other areas of your body.
Joint pain. Bouts of severe joint pain and swelling are especially likely to affect your knees, but the pain can shift from one joint to another.
Neurological problems. Weeks, months or even years after infection, you might develop inflammation of the membranes surrounding your brain (meningitis), temporary paralysis of one side of your face (Bell's palsy), numbness or weakness in your limbs, and impaired muscle movement.
Quick Links
Cancer natural treatment
Diabetes
Obesity
Lyme disease